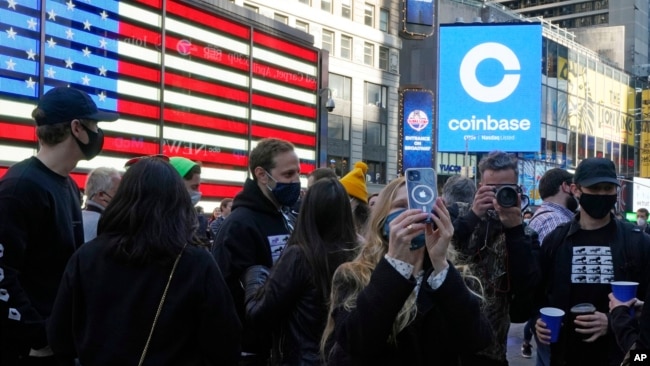 Going public means a company sells shares of stock to raise money. It also means that the owner of the company must now answer to those who bought the stock.

At one point before the listing of the company, Coinbase, the value of bitcoin rose above $64,000. Coinbase is the largest U.S. exchange for digital currency, also known as cryptocurrency. Bitcoin is the world’s biggest form of cryptocurrency.

The value of bitcoin has gone up and down wildly since it was created in 2009 by a mysterious developer or group that went by the name Satoshi Nakamoto. This year, the digital currency reached another major record in early January when it hit $40,000.

Experts say the continued climb of bitcoin in recent months was partly fueled by decisions by some major U.S. companies to invest in bitcoin. Those moves -- along with the listing of Coinbase on the Nasdaq -- have helped bring cryptocurrencies more into the U.S. financial mainstream, the experts say.

One company supporting bitcoin is American electric carmaker Tesla. The company announced in February it had invested about $1.5 billion in the digital currency. Tesla said it planned to accept bitcoin as payment for its cars and other products.

Another major buyer was financial services company Square, which said in February it had invested $170 million dollars in bitcoin. Square operates the Cash App payment service. PayPal and Visa also recently said they would permit users to make payments with cryptocurrencies.

Even major American investment banks like Goldman Sachs and Morgan Stanley have signaled interest in getting involved in in digital currencies in the future.

Financial companies had long warned against such investments because of the high risks and unpredictability linked to them. But the listing of Coinbase on the Nasdaq is seen by some financial experts as the biggest milestone yet for cryptocurrencies.

William Cong is an associate professor of finance at Cornell University’s SC Johnson College of Business. He told Reuters that the Coinbase listing “is significant in that it marks the growth of the industry and its acceptance into mainstream business.”

Michael Hewson, an analyst at CMC Markets in Britain, told the French press agency AFP he thinks digital currencies have had a good year. "With bitcoin already having more than doubled in the last six months and cryptocurrencies becoming more popular with more mainstream investors, it can certainly be argued that crypto has become more mainstream in the past 12 months," he said.

Wedbush analyst Daniel Ives wrote earlier this week that the Coinbase listing could be “a watershed event for the crypto industry.”

The listing is by far the biggest yet of a cryptocurrency company. The company chose a direct listing on Nasdaq. Such a listing does not permit the company to raise new funds. But it does offer current shareholders – founders, employees and early investors – the chance to sell their stocks on the market.

San Francisco-based Coinbase was founded in 2012 and says it has 56 million users worldwide. It permits users to buy and sell bitcoin and other cryptocurrencies. It estimated last week it would earn $1.8 billion during the first quarter of 2021. During all of 2020, the company reported earnings of $1.3 billion.

Wall Street experts have projected Coinbase could be valued at between $65 to $100 billion. The Nasdaq gave the company a target price of $250 a share.

Some industry analysts, however, think Coinbase has been highly overvalued. David Trainer, CEO of investment research firm New Constructs, told the Associated Press the company has “little-to-no-chance” of meeting its profit expectations. He added that Coinbase had a “ridiculously high valuation.” Last week, Trainer estimated a valuation closer to $18.9 billion, arguing that Coinbase will face more competition as the cryptocurrency market grows.

mainstream – adj. the beliefs or way of living accepted by most people

milestone – n. an important point in the progress or development of something

analyst – n. a person who studies or analyzes something

watershed – n. a moment in time when important change happens