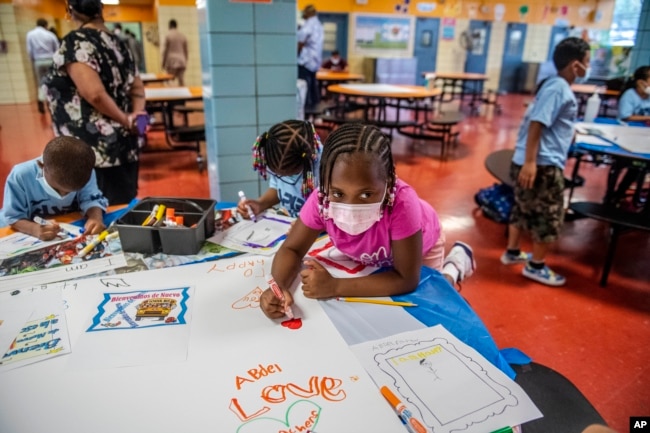 FILE — In this Aug. 17, 2021 file photo, students write and draw positive affirmations on poster board at P.S. 5 Port Morris, an elementary school in The Bronx borough of New York. New York City wants to phase out its program for gifted and talented studentsFILE - ２０２１年８月１７日、ニューヨークのブロンクス地区にある小学校、P.S.５ポートモリスで、生徒たちがポスターボードに肯定的な言葉を書いたり、描いたりしている写真。ニューヨーク市は、才能のある生徒のためのプログラムを段階的に廃止したいと考えています。 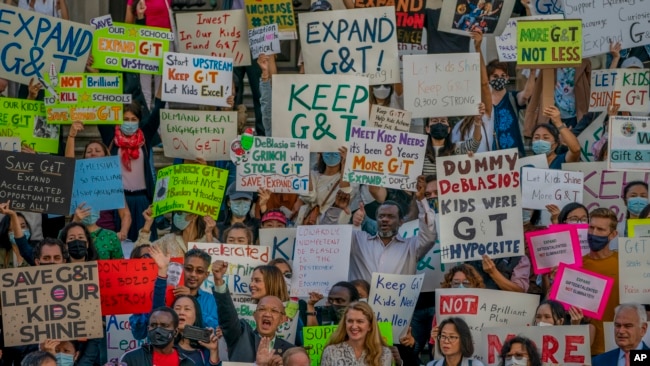 American school systems usually have gifted and talented programs for students that show a high level of success.

Such programs have been under much criticism in recent years. Some parents say they worsen racial segregation and inequities in the country’s education system.

In early October, the mayor of New York City announced plans to end the gifted and talented programs in the country’s largest school system. If it goes forward, that would be a big win for groups supporting an end to similar programs from Boston, Massachusetts, to Seattle, Washington.

From the start, gifted and talented school programs drew worries they would produce an unequal education system in U.S. public schools. Many programs began as efforts to keep white families from leaving racially diverse public schools in urban areas. They were created to compete with high-performing private schools.

School leaders and parents increasingly have to deal with difficult questions over equity. They are trying to find ways to teach strong learners while continuing to help other students succeed. It is a question that is driving the debate over whether to grow gifted and talented programs or end them completely.

“I get the burn-it-down and tear-it-down mentality, but what do we replace it with?” asked Marcia Gentry. She is a professor of education and the director of the Gifted Education Research and Resource Institute at Purdue University in Indiana.

Gentry co-wrote a study two years ago that followed the racial inequities in gifted and talented programs.

The study found that U.S. schools identified 3.3 million students as gifted and talented. But an additional 3.6 million who should have also been considered gifted were not included in the programs. The study found these students were disproportionately Black, Latino and Native American.

An Associated Press study of recent federal data found that nationwide, 8.1 percent of white and 12.7 percent of Asian American children in public schools are considered gifted. But only 4.5 percent of Hispanic and 3.5 percent of Black students are identified as gifted.

Gifted and talented programs aim to provide more demanding instruction for students who feel limited with the regular program. Critics of the push to end them say it punishes successful students. They say it also cuts off a chance for students to move up, especially for those from poor families without the means to attend private schools.

In Seattle, a former top official of the school system tried to end its gifted and talented program. She blamed it for worsening school segregation. In its own recent study, Seattle public schools found only 0.9 percent of Black children had been identified as gifted, compared with 12.6 percent of its white students.

School leaders have since approved changes to the program. Students will be admitted based on their performance. They are no longer required to take a test to enter the program. The selection committee will also consider input from teachers, family and community members.

Rita Green works for the local NAACP office, a racial justice organization. She said the changes do not go far enough. She wanted the schools to help all of the city’s 50,000 students, not just the most successful.

Since the killing of George Floyd in Minneapolis, other school systems around the U.S. are also rethinking their gifted and talented programs.

Boston schools voted to expand its program and guarantee placements for top students from poorer areas of the city. A top high school in San Francisco, California removed its entrance exam. As did a top high school in Fairfax, Virginia, where parents recently lost a legal fight to keep the test.

Most gifted and talented programs have used test scores to decide which students to admit. Some wealthier families are able to spend thousands of dollars on instruction to increase their child’s scores.

Nowhere has the debate been as heated as in New York City. Mayor Bill de Blasio said last month that he would begin to end the program, calling it “exclusionary.”

Eric Adams, likely the city’s next mayor, said he does not support ending the program.

But Gentry, the Purdue researcher, agreed that it was time to fix the equity problems of gifted and talented programs. She urged parents and school officials to do the hard work of finding a compromise.

“I know the inequities exist,” Gentry said. “I worry that the easy solution is to stop doing it.”

talented — adj. having a special ability to do something well​

segregation — n. the practice or policy of keeping people of different races, religions, etc., separate from each other​

diverse — adj. made up of people or things that are different from each other​

disproportionate — adj. having or showing a difference that is not fair, reasonable, or expected : too large or too small in relation to something​

abolish — v. to officially end or stop (something, such as a law) : to completely do away with (something)​

inherent — adj. belonging to the basic nature of someone or something​

score — n. the number of points that someone gets for correct answers on a test, exam, etc.​

exclusive — adj. available to only one person or group​