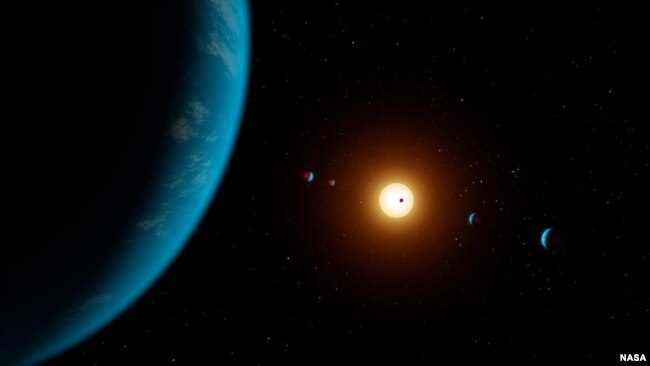 This illustration shows the seven-member TRAPPIST-1 planetary system as the planets might look as viewed from Earth using a fictional, incredibly powerful telescope. (Image credit: NASA/JPL-

The American space agency NASA says it has used a new technology method to help confirm the existence of 301 new exoplanets.

Exoplanets are planets that orbit stars other than the sun. Before the latest discoveries, NASA had confirmed the existence of more than 4,569 such planets. Thousands of other “candidate” exoplanets have been identified. But these require additional study.

Exoplanets are difficult for telescopes to identify. One reason is that the bright light of the stars they orbit can hide them. The search process can involve looking for decreases in the light level of stars. Such drops could be caused by a planet passing in front of a star.

NASA has used two space telescopes to confirm thousands of exoplanets. The Kepler space telescope was launched in 2009 and operated until October 2018. At that time, NASA announced it was retiring Kepler because the spacecraft had “run out of fuel needed for further science operations.”

The other space telescope is called the Transiting Exoplanet Survey Satellite, or TESS. NASA launched TESS in April 2018 to build on Kepler’s observations. TESS continues to operate today.

NASA’s confirmations of the 301 new exoplanets were based on data collected by the Kepler space telescope. The data was processed through a machine learning system called ExoMiner.

Machine learning systems are a form of artificial intelligence (AI). They are trained to learn a task over time by being fed huge amounts of data.

In this case, NASA said it used the machine learning method to examine existing data to identify real exoplanets from so-called “imposters.”

ExoMiner is powered by data gathered from past efforts to confirm or rule out possible exoplanets. The system was designed to use the same methods that human experts use to confirm new exoplanets.

NASA said the system provides much-needed assistance to scientists who are expertly trained to confirm the existence of such planets. The agency’s space telescopes collect data on thousands of stars. It is a huge effort for humans to examine so many stars. ExoMiner is designed to ease that load and improve the accuracy of identifying new exoplanets.

Jon Jenkins is an exoplanet scientist at NASA’s Ames Research Center in California. He said in a statement that ExoMiner offers big improvements over other machine learning programs used to identify exoplanets in the past.

The main reason for this, Jenkins said, is that the new system permits scientists to easily confirm ExoMiner’s findings.

“There is no mystery as to why it decides something is a planet or not,” he said. “We can easily explain which features in the data lead ExoMiner to reject or confirm a planet.”

The machine learning system was developed and tested by NASA researchers and the team’s international partners. It was described by a paper published in the Astrophysical Journal.

The paper explains that ExoMiner discovered the 301 exoplanets from a list of candidates based on data from the Kepler space telescope. They had been identified and declared as possible exoplanets by scientists at the Kepler Science Operations Center. But NASA said no human researchers had been able to confirm them.

“When ExoMiner says something is a planet, you can be sure it's a planet,” said Hamed Valizadegan. He is the ExoMiner project lead and oversees machine learning operations at the Universities Space Research Association at the Ames center.

Valizadegan added that the system is “in some ways more reliable” than both existing machine learning methods as well as human experts. He said one reason for this is that ExoMiner is free of “biases” that can affect human identification operations.

The NASA team said it plans to build on ExoMiner’s success by expanding the system. The goal would be to include data from TESS and future telescopes that aim to discover new exoplanets.

artificial intelligence – n. an area of computer science that deals with giving machines the ability to seem like they have human intelligence

imposter – n. someone who pretends to be someone else in order to trick people

feature – n. a typical quality or important part of something

reliable – adj. able to be trusted or believed

bias – n. prejudice in favor of or against one thing person or group compared with another