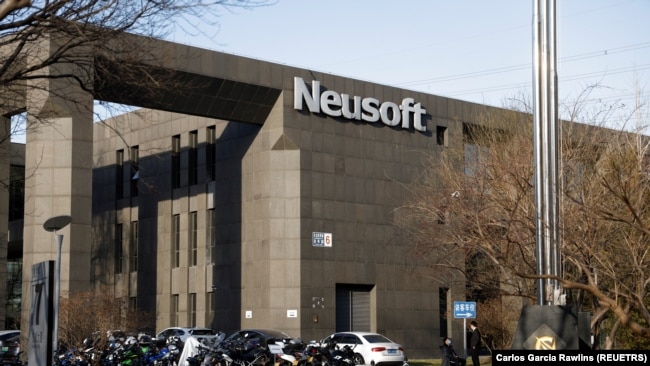 One of Neusoft's office building in Beijing, China on Nov. 24, 2021. The Chinese company was given $782,000 and two months to create a system that will track journalists, international students, and other "suspicious people." (REUTERS/Carlos Garcia Rawlins２０２１年１１月２４日、中国・北京にあるNeusoft社のオフィスビルの１つ。この中国企業は、ジャーナリストや留学生などの "不審者 "を追跡するシステムを作るために、７８万２,０００ドルと２カ月の期間を与えられた。(REUTERS/Carlos Garcia Rawlins) 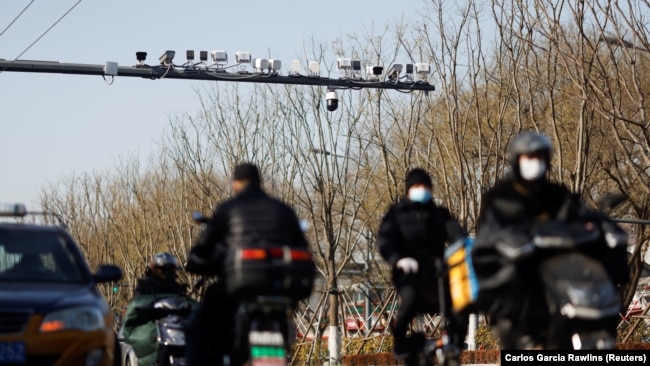 Security cameras overlook a street as vehicles pass under in Beijing, China on Nov. 25, 2021. The system will alert police and officials if people who have been grouped as a "risk" cross a border, or perform other activities. (REUTERS/Carlos Garcia Rawlins)２０２１年１１月２５日、中国・北京で、車が下を通る通りを見下ろす防犯カメラ。このシステムは、”リスク”としてグループ化された人々が国境を越えたり、その他の活動を行ったりすると、警察や当局に警告する。(REUTERS/Carlos Garcia Rawlins) 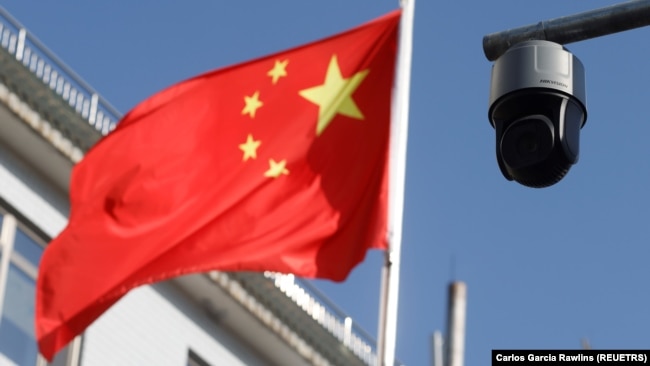 A security camera overlooking a street is pictured next to a nearby flag of China in Beijing, China on November 25, 2021. (REUTERS/Carlos Garcia Rawlins)

Security officials in China’s Henan province are working toward a new surveillance system meant to follow international students, reporters and other “suspicious people.” That information comes from the Reuters news agency.

Henan is in central China. It is the country’s third-largest province by population.

A document published in July explained plans for the Henan system. The document says that the system will involve 3,000 facial recognition cameras that connect to national and local databases. The system will create individual files on reporters, international students and others.

The document shows the government paid $782,000 to the Chinese tech company Neusoft on September 17. The company was given two months to build the system. Reuters could not confirm if the system is currently operational.

China is building what security experts describe as one of the world’s most advanced surveillance technology networks. The country already has millions of cameras in public places and is increasing its use of facial recognition technology and mobile phone tracking.

United States-based surveillance research firm IPVM has closely followed China’s growing surveillance network. It said the Henan document was notable because it named reporters as targets and showed how public security officials could quickly find them and stop them from working.

The document was no longer available to the public on November 29.

The nearly 200-page document from the Henan Public Security Department does not explain why it wants to follow reporters or international students. The document also named “women from neighboring countries that are illegal residents” as another group of people the system should follow.

The document says suspicious people must be followed and controlled. It said cameras must be able to build a dependable file for individuals whose faces are partly covered. It also said that those targeted must be searchable on databases by using a picture or searching a facial description.

At least 2,000 officials and police officers will use the surveillance system.

The document said reporters will be put into three groups: red, yellow and green, in decreasing order of risk. A warning will be set off if a reporter registers at a Henan hotel, buys a ticket or crosses the provincial border.

The document also said the system should be able to follow the movements of international students through methods such as mobile phone positioning and travel activity. It said students should be followed especially closely during important dates such as the country’s national day or the yearly meeting of parliament.

In February, the Foreign Correspondents’ Club of China, or FCCC, said China used coronavirus prevention measures, fear, and restrictions into the country to limit foreign reporting in 2020.

The Chinese foreign ministry at the time called the FCCC report “baseless.” It said China always welcomed media members from all countries to cover news in China when they followed the law.

file – n. a collection of documents that have information you want to keep and that are stored so that they can be found easily

track – v. to follow and find (someone or something) especially by looking at evidence

resident – n. someone who lives in a particular place

ticket – n. a piece of paper that allows you to see a show, participate in an event, or travel on a vehicle