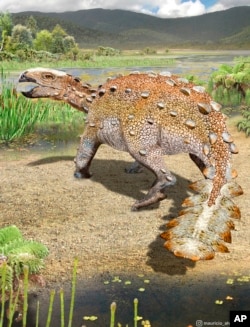 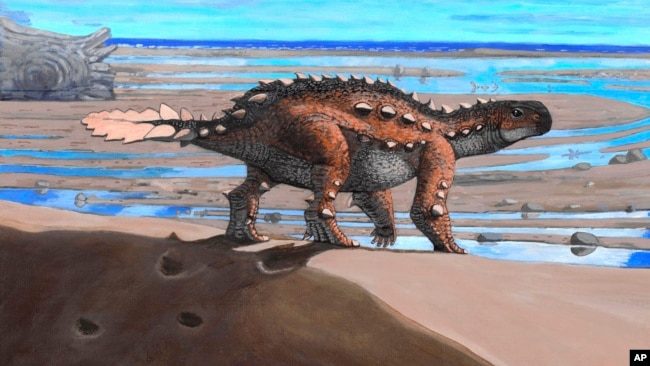 Scientists in Chile have discovered the bones of a dinosaur they say used its unusual tail as a deadly weapon.

Researchers say the dog-sized creature had a tail weapon unlike those seen on any other animal. The tail had a series of “blades” on each side that could be used to cut its enemies.

At first, the scientists thought the plant-eating dinosaur might have belonged to a similar species called stegosaurus. But after studying pieces of skull and examining DNA, the scientists decided the dinosaur must be from a new species.

The researchers named the dinosaur stegouros because of its similarities to stegosaurus.

The find is described in a study recently published in Nature. Alex Vargas was the lead writer of the study. He told The Associated Press that the animal’s blade-like tail could be used as a cutting weapon similar to those used by Aztec warriors.

“It’s a really unusual weapon,” said Vargas, a scientist with the University of Chile. He said information on the species should be added to books on prehistoric animals for children. “It just looks crazy,” Vargas added.

The bones, or fossil, is from about 72 million to 75 million years ago, the team said. Researchers believe the animal is part of the ankylosaur family of dinosaurs. They are believed to have walked the Earth throughout the Jurassic and Cretaceous periods.

The scientists say the dinosaur must have been a rare southern hemisphere member of the family. Vargas called it “the lost family branch of the ankylosaur."

The fossil appears to be an adult based on the way the bones are connected, Vargas said. It was found with its front end flat on its stomach. The back end sat at a lower level, almost as if caught in sand, he added.

The tail was probably used as a defense against large predators. Vargas said the animal’s enemies were also likely persuaded not to attack by armor-like bones that made stegouros “chewy.”

Not only is this “a really bizarre tail,” but it is from far southern Chile, said Macalester College biologist Kristi Curry Rogers. She was not part of the study. Rogers said discoveries of that kind of animal have not been made in the area before.

She added that the finding shows that scientists are “just scratching the surface” when it comes to understanding the many different kinds of dinosaur species. “Stegouros reminds us that if we look in the right places at the right times, there is so much more still to discover.”

dinosaur – n. a very large animal that used to live millions of years ago

blade – n. the flat part on a knife or similar tool or weapons

predator – n. an animal that hunts and kills other animals for food

chewy – adj. needing to be chewed a lot before being swallowed

scratch the surface – phr v. to deal with only a small part of a subject or problem

remind – v. make someone think of something they have forgotten about