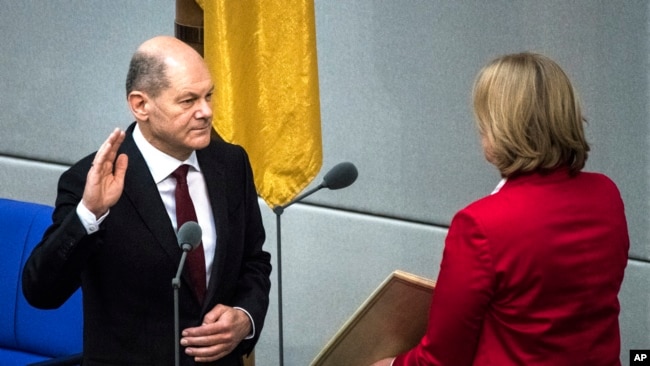 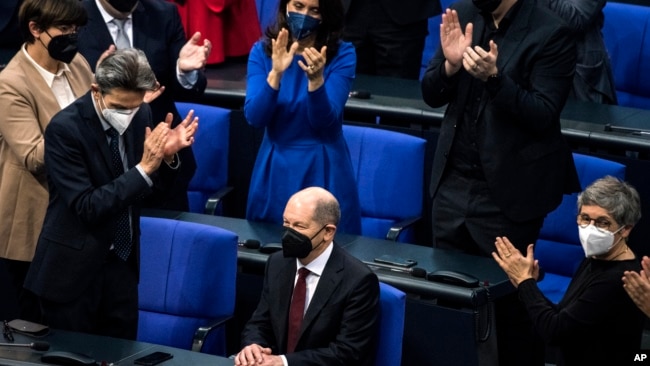 Olaf Scholz of the Social Democrats receives applause from lawmakers after he was elected new German Chancellor in the German Parliament Bundestag in Berlin, Wednesday, Dec. 8, 2021. (Photo/Stefanie Loos)２０２１年１２月８日（水）、ベルリンのドイツ連邦議会で、新ドイツ首相に選出された後、議員から拍手を受ける社会民主党のオラフ・ショルツ氏。(写真/Stefanie Loos) 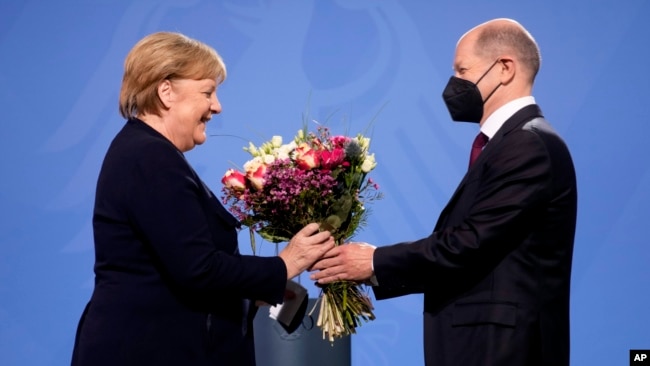 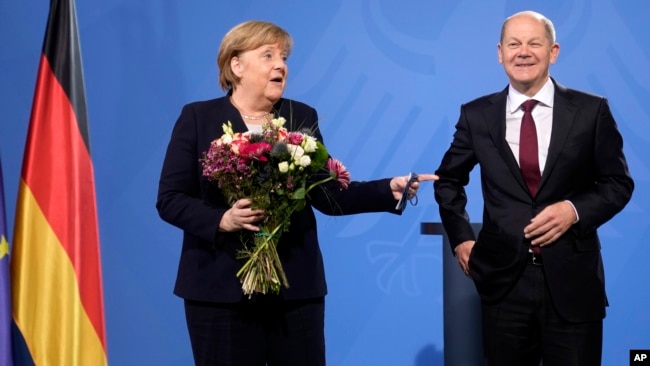 Scholz is a member of the country’s Social Democratic Party, or SPD. The 63-year-old had served as Germany’s vice chancellor and finance minister since 2018.

Lawmakers in Germany’s lower house of parliament supported Scholz with a clear majority. He is the country’s ninth chancellor since World War Two.

Scholz has promised to use his office to help modernize Germany and fight climate change. But his government faces the immediate problem of dealing with the country’s most difficult period of the COVID-19 crisis.

After being sworn in, Scholz met later with Merkel, who officially handed over the chancellor’s office. Merkel wished Scholz a "steady hand" as the country’s new leader.

In a short speech, Scholz praised Merkel as a great leader and thanked her for a close and trustful relationship over the years.

"I would like to build on the north-east German mentality, if I may say so…” Scholz said. The comment pointed to Scholz and Merkel’s shared northern roots in the port city of Hamburg. He added that “not much will change on that front."

Scholz has positioned himself as Merkel's natural successor. He will seek to lead Germany through a set of problems including rising aggressiveness from Russia and China.

Scholz will lead a three-way ruling coalition. It includes the environmentalist Green party and the financially conservative Free Democrats, or FDP.

Scholz is an expert negotiator and experienced politician. As the SPD’s leader from 2002 until 2004, he defended highly-debated labor market reforms and social welfare cuts under former Chancellor Gerhard Schroeder. Later, as labor minister, he sought policies that helped protect millions of German workers from the effects of the world economic crisis that hit in 2008.

Scholz served as the mayor of Hamburg from 2011 to 2018. After that, he returned to Berlin to serve as Merkel's finance minister. In that position, he helped end the government’s balanced budget goal and permitted record new borrowing. The action helped protect companies and workers from the effects of the COVID-19 pandemic.

On the European level, he worked closely with France and persuaded Merkel to support a debt-financed European Recovery Fund worth $900 billion. That program assisted EU member states hit hardest by COVID-19.

The 67-year-old Merkel has said she does not plan to seek another political position. When asked earlier this year about her post-chancellor life, she said she planned to take time to read and sleep. “And then let’s see where I show up,” she added.

mentality – n. a person’s opinions of way of thinking