Taliban Seeks Ties with US, Other Countries

Taliban Seeks Ties with US, Other Countries 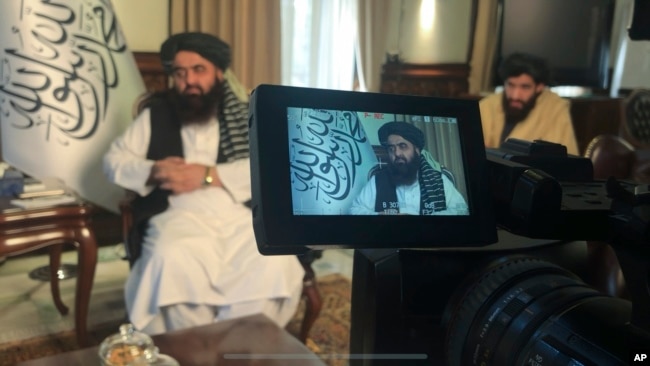 A top Taliban leader expressed that idea while talking with The Associated Press (AP) recently. He said the group seeks to earn the world’s “mercy and compassion” to help millions of Afghans in need.

“Sanctions against Afghanistan would...not have any benefit,” Muttaqi said from Kabul on Sunday.

“Making Afghanistan unstable or having a weak Afghan government is not in the interest of anyone," he added. His assistants include workers from earlier governments as well as Taliban fighters.

Muttaqi said he understood the world’s anger over limits on girls' education and on women in the workforce. In many parts of Afghanistan, female students between grades seven and 12 have not been permitted to go to school since the Taliban took over. Many female government workers have been told to stay home. Taliban officials have said they need time to create schools and workplaces which separate women and men to meet Islamic rules.

The Taliban first ruled Afghanistan from 1996 to 2001. The group barred girls and women from schools and jobs. They also banned most entertainment and sports, and carried out executions in front of large crowds.

But Muttaqi said the Taliban has changed since it last ruled.

Muttaqi said that under the new Taliban government, girls are going to school all the way through grade 12. He said the gains are taking place in 10 of the country's 34 provinces. Private schools and colleges are operating as they were before the Taliban took power. And all women who had held jobs in healthcare are working again.

“This shows that we are committed in principle to women participation," he said.

He said the Taliban has not targeted its opponents. Leaders of the earlier government live without threat in Kabul, he said. Most of them, however, have fled.

Last month, the international group Human Rights Watch published a report that said the Taliban killed or caused more than 100 former police and intelligence officials to disappear. However, there have been no reports of mass acts of punishment.

He said the Taliban made mistakes in their first months in power and promised to make reforms to help the nation. He did not tell the AP what the mistakes were or what the possible reforms could be.

Muttaqi disputed comments by U.S. General Frank McKenzie. He said that the terror group al-Qaida has gotten more powerful in Afghanistan since the Americans left. McKenzie is America’s top military official in the Middle East.

The Taliban promised in a February 2020 agreement that it would fight terrorism if U.S troops left the country. Muttaqi said Sunday that the Taliban have kept that promise.

“Unfortunately, there are (always) allegations against the Islamic Emirate of Afghanistan, but there is no proof,” Muttaqi said.

However, he said he hopes that with time the U.S. will see a Taliban-ruled Afghanistan as a benefit to the U.S.

“America will slowly, slowly change its policy toward Afghanistan,” he said.

mercy — n. kind or forgiving treatment of someone who could be treated harshly

compassion — n. a feeling of wanting to help someone who is sick, hungry, in trouble

benefit — n. a good or helpful result or effect

unstable — n. not held in a secure position ; likely to move or fall

entertainment — n amusement or pleasure that comes from watching a performer, playing a game

commit — v. to do something; to carry something out

principle — n. used to say that something which has not yet happened or been done should be possible according to what is known

participation — n. to be involved with others in doing something; to take part in an activity or event with others

allegation — n. a statement saying that someone has done something wrong or illegal

Published11 October
So who are these IS militants?