Boeing Want to Build its Next Airplane in the 'Metaverse' 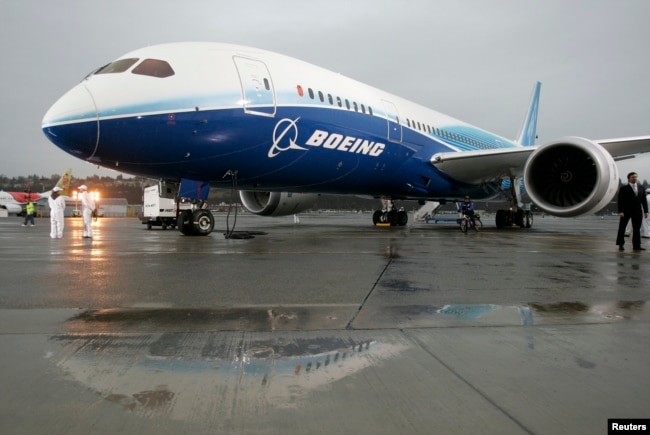 The Boeing 787 Dreamliner sits on the tarmac at Boeing Field in Seattle, Washington after its maiden flight, December 15, 2009. (Reuters)初飛行を終え、ワシントン州シアトルのボーイング・フィールドの駐機場に置かれたボーイング７８７ドリームライナー（２００９年１２月１５日）。(ロイター) 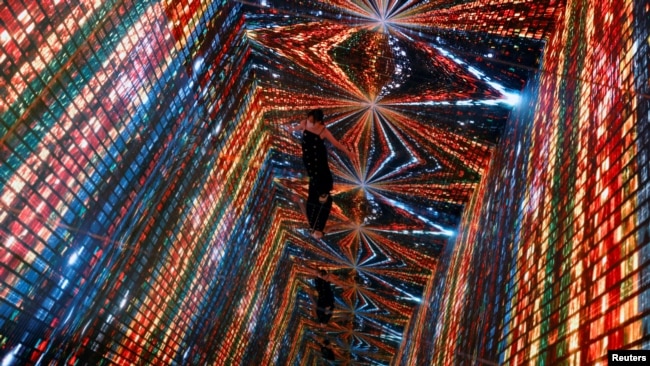 FILE PHOTO: A visitor is pictured in front of an immersive art installation titled "Machine Hallucinations — Space: Metaverse" by media artist Refik Anadol, which will be converted into NFT and auctioned online at Sotheby's, at the Digital Art Fair, in Ho

In the Boeing company’s aircraft factory of the future, 3-D engineering designs work with robots that talk to each other. At the same time, mechanics around the world will be linked in through Microsoft headsets that provide a mixed reality experience.

The Boeing plan aims to unite design, production and airline services operations under a single, digital manufacturing system. The company says it will put in place in the next two years.

Boeing has repeatedly expressed its goal of a digital revolution, but critics say the company’s efforts toward the goal have had mixed results. Industry observers say the goals of improving quality and safety have grown more important as the company faces several threats.

The airplane maker is trying to regain the trust of fliers after the 737 MAX crisis. That plane that was grounded for more than two years after two crashes blamed on electrical problems.

The company says is starting a future aircraft program over the next 10 years that will cost $15 billion.

It also aims to prevent future manufacturing problems like the structural problems that affected the 787 Dreamliner over the past year.

"We are talking about changing the way we work across the entire company," he added.

After years of wild changes in the industry’s market, the demand for new airplanes has heightened the competition between Boeing and Europe's Airbus. Now, their battle moves into factory operations.

Airbus Chief Executive Guillaume Faury is a former automobile research executive. He has promised to "invent new production systems and leverage the power of data" to move its industrial system into the 21st century.

Boeing's digital improvement to date has been marked by progress within certain airplane programs or tools. It has not undergone a total, digital remodel like the kind Hyslop is proposing.

The airplane manufacturers are not alone in their goal to enter the so-called metaverse, a shared digital space that employs virtual reality technology. Automakers like Ford, social media companies like Facebook owner Meta Platforms and other businesses are making similar moves.

Boeing wants development of its next aircraft to include a link to a three-dimensional digital model of the new plane. It also wants the production system to be able to run simulations.

The digital models are backed by a "digital thread" that collects every piece of information about the aircraft starting on its first day of development. This includes airline requirements records, millions of equipment parts, thousands of pages of official approvals, and beyond.

Go with the new

More than 70 percent of quality issues at Boeing have something to do with design, Hyslop said. Boeing believes digital tools will be important to bringing a new aircraft to market in as little as four or five years.

"You will get speed, you will get improved quality, better communication,” Hyslop said.

Yet the plan faces major difficulty in execution.

Boeing has been too concerned about shareholder returns, says Richard Aboulafia an expert with the Teal Group. He said the company’s engineering expertise has been hurt as a result. The company continues to cut spending on research, he added.

Large companies like aircraft parts maker Spirit AeroSystems have already invested in digital technology. But hundreds of smaller suppliers around the world do not have the money or skilled labor to make important, digital changes to their manufacturing systems.

Industry experts say Boeing has come to realize that digital technology alone will not be enough. They say the company also must make organizational and cultural changes.


Words in This Story

3-D (three dimensional) – adj. made in a way that causes an image to appear to be three-dimensional, or having height, width and length

mechanic – n. a person who repairs machines (such as car engines) and keeps them running properly

leverage – v. to use (something valuable) to reach a desired result usually of equal or greater value

virtual reality – n. a world of images and sounds created by a computer which is not physical that is affected by the actions of a person who is experiencing it

simulation – n. something that is made to look, feel, or behave like something else especially so that it can be studied or used to train people

thread – n. (computer) a series of related pieces of information (such as messages on a computer system) that follow in order of time or as steps in a group of activities