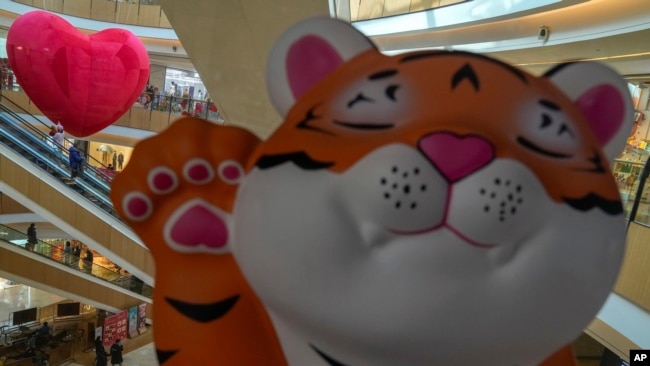 A cartoon tiger is displayed as shoppers wearing face masks to help protect fro the coronavirus ride on escalators at a mall during the Lunar New Year Eve in Beijing, Monday, Jan. 31, 2022. (AP Photo/Andy Wong)

People across Asia prepared Monday to celebrate another Lunar New Year under restrictions related to the COVID-19 pandemic.

The Lunar New Year falls on Tuesday, February 1. It is the most important holiday in China. Each year it is named after one of twelve signs of the country’s traditional zodiac system. This year, 2022, is the Year of the Tiger.

The holiday historically marks the world’s largest yearly movement of people. Before the pandemic, hundreds of millions of Chinese traveled home for Lunar New Year break. Many of them are workers in cities who go back to their home villages.

But it will be the third straight year that people celebrate the holiday during the COVID-19 pandemic. In 2020, Chinese officials ordered a lockdown in Wuhan, China, just two days before Lunar New Year. Wuhan is the central city where the first cases of the new coronavirus were discovered.

Currently, about 85 percent of Chinese are fully vaccinated, the online research website Our World in Data reports. This has led to more people traveling within China this year, even though the government has issued warnings against it. This year, many Chinese were buying traditional supplies to celebrate at home.

About 260 million people traveled in China during the first 10 days of the Lunar New Year holiday season that started January 17. That is fewer than before the pandemic, but up 46 percent over last year. Overall, the government estimates 1.2 billion trips will be made during the holiday period, up 36 percent from 2021.

A 63-year-old retiree from Beijing, Huang Ping, spoke to The Associated Press while shopping at a flower market. He said he thinks the New Year’s “atmosphere has faded” with the closure of religious centers and festivals because of COVID-19 restrictions.

But Huang said he hoped for better times in the new year. “I wish for the (pandemic) to pass as early as possible and for the economy to recover as well,” he said.

Another Chinese retiree, 62-year-old Han Guiha, told the AP he was planning on making the best of the situation. “I'll stay at home enjoying good food and wine,” Han said. “I will make my house clean and beautiful. Right now, the virus is spreading and we need to be careful.”

Chen Lianshan is a Beijing University expert on Chinese folklore. He said that with the Year of the Tiger, many people are hoping the traditional powers linked to the animal will help put the country on a path out of the pandemic. The tiger represents “a protection against evil spirits and it can defeat demons and ghosts of all kinds…” Chen said.

Elsewhere in Asia, there were signs that some celebrations might not be as restricted as last year. In many nations, most people are now vaccinated with at least two shots against COVID-19.

In the old quarter of Vietnam’s capital, Hanoi, people shopped over the weekend for traditional supplies for the New Year festival, known locally as Tet. Officials canceled Tet fireworks and other large events in an effort to reduce virus spread.

In Thailand, officials in Bangkok decided not to hold traditional Lunar New Year celebrations in Chinatown for the second straight year. But another event, the city’s traditional lighting of lanterns, will take place. About 69 percent of Thais are fully vaccinated.

In Singapore, officials ordered restrictions on the number of visitors that people can welcome each day.

In Taiwan, business was strong at a flower market in Taipei on Monday as people made last-minute shopping trips. An estimated 73 percent of Taiwanese are fully vaccinated.

A shopkeeper in Taipei named Lee told the AP the pandemic “is surely affecting” Lunar New Year celebrations. But, he added, “people still like flowers, so they come out and buy flowers.”

wine – n. an alcoholic drink made from the juice of grapes

folklore – n. the traditional stories and culture of a group of people

ghost – n. the spirit of a dead person

lantern – n. a light inside a container that has a handle for carrying it or hanging it up