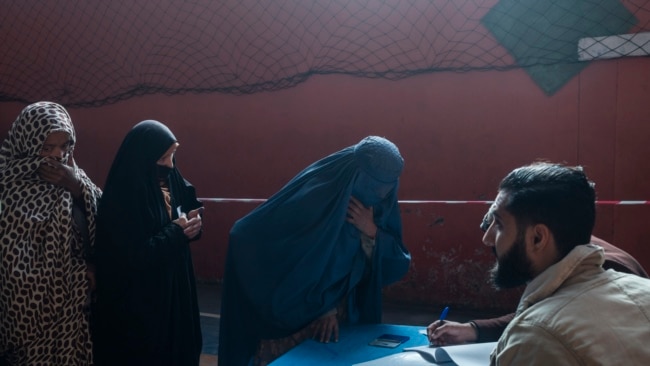 A woman registers to receive money from the WFP in Kabul on Nov. 17, 2021. (AP/Petros Giannakouris)

A Red Cross official has sharply criticized the continuation of sanctions and freezes in international aid to Afghanistan. The official says the measures are preventing the delivery of basic services to the population.

Dominik Stillhart is the director of operations for the International Committee of the Red Cross (ICRC). He released a statement Monday about his six-day visit to field hospitals in Afghanistan. He described the suffering he saw of hungry children and the anguish of their parents.

The United Nations says more than half of Afghanistan’s estimated 40 million population is likely to go hungry this winter unless more money is donated. The World Food Program said that fuel costs are up, food prices are rising, fertilizer is more expensive, and all of this feeds into the worsening Afghan crisis.

The return to power of the Islamist Taliban after the withdrawal of U.S.-led foreign troops caused an economic crisis. Afghan humanitarian needs rose to record levels following the more than 20 years of war and a long, widespread period of dry weather.

The international community has refused to give diplomatic recognition to the Taliban government. Human rights activists condemn its treatment of females. The Taliban banned women from most paid employment and restricted education for most females.

Lack of international recognition resulted in a freeze of several billion dollars in yearly foreign assistance to Afghanistan. The U.S. has also blocked the Taliban from $10 billion worth of Afghan money and property. The sanctions have made it very difficult for the Taliban to pay workers or import needed goods.

Stillhart said that recent resolutions from the U.N. and general economic sanctions have caused donors to reconsider the assistance they provide. That has resulted, he said, in a slowdown of live-saving help to civilians.

On Monday, the ICRC launched an effort to support 18 Afghan medical centers and their 5,100 employees. The aid group is paying for operational costs and providing medical supplies. The ICRC says it plans to continue the effort for six months.

Dominik Stillman says the future of medical care and education in Afghanistan are dependent upon international support.

“States must engage with Afghanistan. This is the only way to prevent a total collapse of essential services like health care and education. Political considerations should not interfere with humanitarian action,” Stillhart said.

Experts say Washington and other Western governments have few good choices in dealing with Afghanistan. They can either try to work with the Taliban or they can watch the crisis worsen, destroying gains made from 20 years of development efforts.

Stillhart is urging donors to find “creative solutions” to save the lives of millions of Afghans. He told the Agence France-Presse (AFP) that the economic sanctions "meant to punish those in power in Kabul are instead freezing millions of people across Afghanistan out of the basics they need to survive.”

Sanctions on banking services hurt the economy and make it hard to deliver aid, he said.

In October, the group of leading economies known as the G-20 discussed the crisis in Afghanistan. They agreed to look for a way to provide more aid that can be protected from Taliban misuse.

One member, the European Union, announced it would provide $1.15 billion in aid for Afghanistan.

Earlier this month, Jan Egeland, secretary general of the Norwegian Refugee Council (NRC), said aid should reach Afghanistan and the neighboring countries before cold weather sets in. He called the international reaction to the suffering of Afghans “really pitiful.”

sanctions – n. an action that is taken or an order that is given to force a country to obey international laws by limiting or stopping trade with that country, by not allowing economic aid for that country — usually plural

engage with – phrasal verb. to give attention to something: to deal with

pitiful – adj. causing feelings of dislike or disgust by not being enough or not being good enough