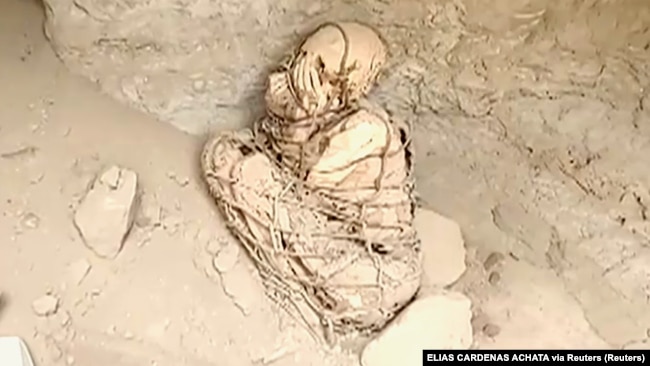 Researchers believe they found an 800 year old mummy outside of Lima, Peru. 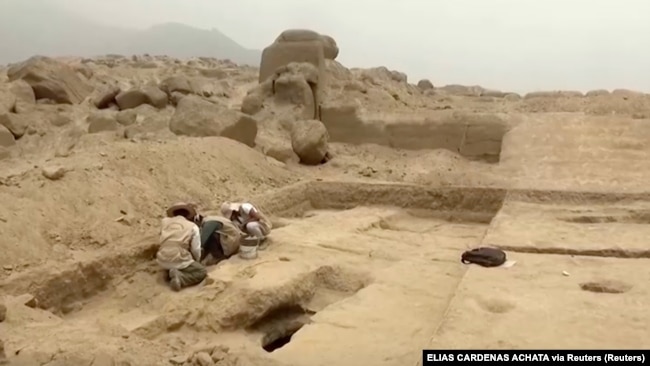 A view of the dig site where researchers believe they found an 800 year old mummy outside of Lima, Peru.ペルーのリマ郊外にある、800年前のミイラを発見したとされる発掘現場の様子。

Researchers believe they found an 800 year old mummy outside of Lima, Peru

Researchers have found a preserved body thought to be 800 years old in the South American country of Peru.

The body was mummified. Mummification is a method used by ancient cultures to preserve the bodies of dead people.

One archaeologist involved said the body is from the Lima area of the country. The discovery was announced last week.

Pieter van Dalen Luna of the State University of San Marcos described the mummy. “The whole body was tied up by ropes and with the hands covering the face,” he said. He added that the process fits with other burials in the area.

Van Dalen Luna said the person lived high in the Andes Mountains. It is not known if the body was that of a man or a woman.

The next step is to use a process called radiocarbon dating to find a more exact date of when the person lived. The process measures the presence of a radioactive form of carbon which lets scientists estimate the age of something that was once alive.

Van Dalen Luna said the mummy was found outside of Lima in a burial place. The burial contained objects including stone tools, vegetables and pottery.

Peru is the home of the ancient city of Machu Picchu. It has hundreds of archaeological places where researchers are learning more about the Incan Empire which ruled the area over 500 years ago.

archaeologist – n. a scientist who studies past human life activities by studying bones, tools and other objects of ancient people.

preserve – v. to keep (something) in its beginning state or in good condition