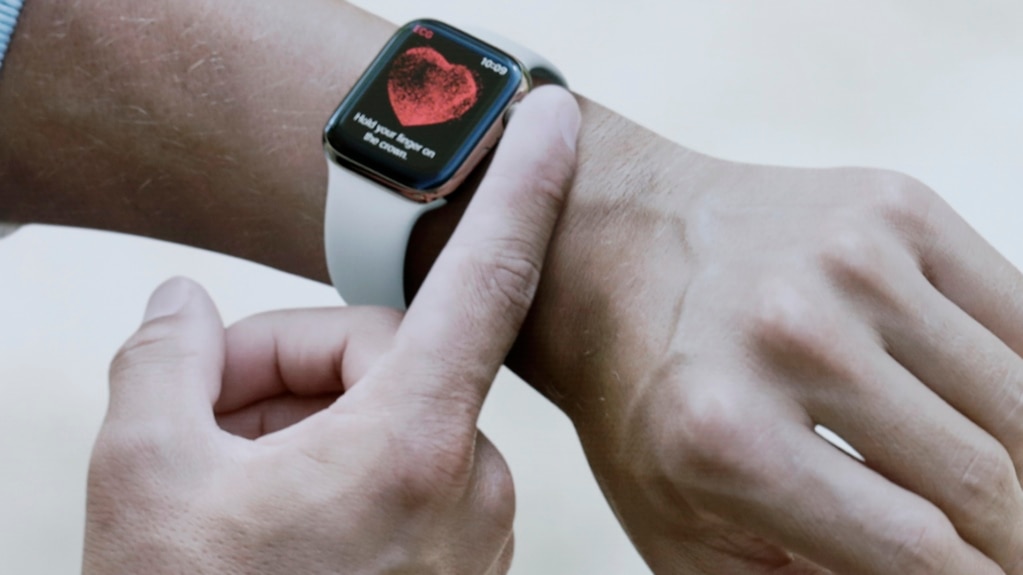 An image of the Apple Watch Series 4 is shown during a presentation at the Steve Jobs Theater during an event to announce new Apple products on Wednesday, Sept. 12, 2018, in Cupertino, Calif. (AP Photo/Marcio Jose Sanchez)
Researchers are studying the effectiveness of wearable devices to identify early signs of disease, including COVID-19.Many people already use devices such as the Fitbit or Apple Watch to measure their heart rate and other physical activity. Researchers are now studying whether this kind of technology could be used to watch for early warning signs of COVID-19.One such device is being tested at West Virginia University in the United States. Researchers there reported in May that it can identify COVID-19 symptoms up to three days before people start to experience them.The researchers are performing tests with a device called the Oura Ring. The ring, worn on the finger, has been around for about two years. It was designed to monitor physical activity, sleep effectiveness and heart health.The ring sends the information it collects to an app, which rates the quality of the user’s activities. The app uses artificial intelligence, AI, tools to predict the start of COVID-19 related symptoms, such as a high body temperature and breathing problems.  The researchers said early tests had shown the system could “predict the onset of COVID-19 related symptoms three days in advance.” They reported a success rate of over 90 percent.Ali Rezai is the head of the university’s Rockefeller Neuroscience Institute. In a statement, Rezai said he thinks the system can help to protect health care and emergency workers dealing with COVID-19 and other fast-spreading diseases.Recently, the National Basketball Association, NBA, decided to supply the Oura Ring to its players in an attempt to identify possible signs of COVID-19 as early as possible.Another research project is taking place at the Scripps Research Institute in San Diego, California. The DETECT study is examining data from devices worn by more than 30,000 volunteers. It aims to show whether wearables can predict the start of COVID-19 in people not yet showing symptoms.Scripps researchers already demonstrated the value of wearable technology in predicting viral infection. Their findings appeared earlier this year in the British publication The Lancet.  Results of both studies suggest the devices "have the potential to identify people who are pre-symptomatic but still infectious," said Jennifer Radin, the leader of the Scripps research. She spoke to the French Press Agency AFP.Scripps researchers say they hope to demonstrate that data from wearables may be more dependable and effective than temperature readings."Forty percent of people who come down with COVID don't have a fever," Radin said. "This is something that can be used to screen people that's better than a temperature check."One effective predictor can a person’s heart rate when he or she is at rest. Experts say this is because the resting heart rate usually remains unchanged before an infection."We see these changes (in heart rate) four days before someone starts to develop a fever," Radin added. Heart rates are easily and effectively measured by most wearables.Eric Topol, director of the Scripps institute, told the AFP the idea of using wearables appears promising. He noted that more than 100 million Americans already have a smartwatch or other fitness monitoring device.  While such devices can provide important data to researchers, Topol noted that getting good results requires persuading large numbers of people to take part in the studies.Researchers from California’s Stanford University, in cooperation with Scripps, launched research in April on the use of wearables to detect COVID-19."Smartwatches and other wearables make many, many measurements per day…which is what makes them such powerful monitoring devices," said Michael Snyder. He heads the Center for Genomics and Personalized Medicine at Stanford’s School of Medicine.Snyder added that AI-powered devices can be useful in helping individuals identify signs of a serious disorder that they may not detect themselves. Such technology “could help people determine if they should stay home in case their body is fighting off an infection," he said._______________________________________________________________

monitor – v. to watch, observe or listen toapp – n. a program for a smartphone or other device that performs a special functionartificial intelligence – n. the power of a machine to copy intelligent human behaviorfever – n. a high temperature that can develop in sick peoplein advance – n. beforehanddata – n. information or facts about somethingpotential – adj. having or showing the capacity to become or develop into something in the futurescreen – v. find out if someone has an illness by doing tests on themdetermine – v. to discover facts or the truth about something
« ハグの無い世界 宇宙旅行；驚きのその思わぬ課題とは »
Profile