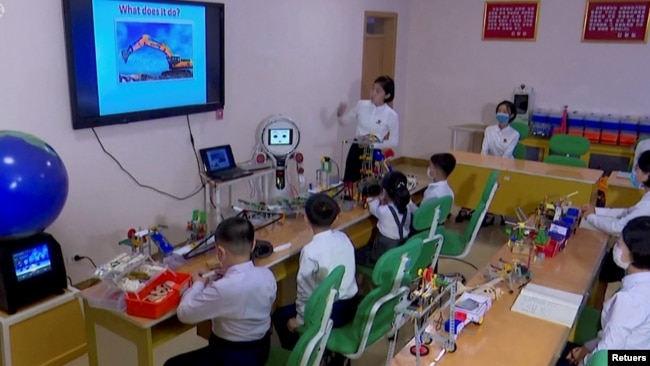 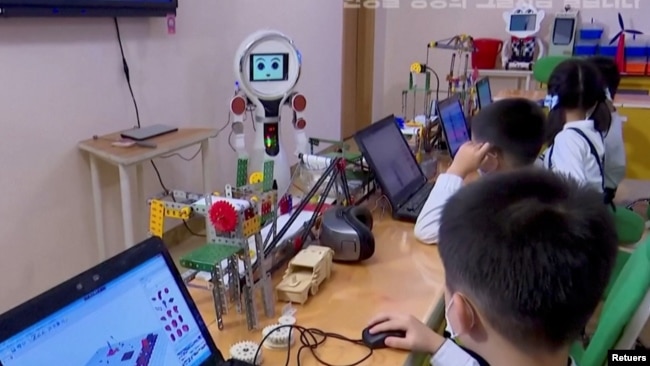 A North Korean student sits in front of a robot in Pyongyang, North Korea November 3, 2021, in this still image obtained from Reuters. (REUTERS TV/KRT)

North Korea has demonstrated the use of educational robots to help students in subjects like English, math and music.

A report by the country’s state-run television station KRT showed several different robots being used in the classroom.

North Korean leader Kim Jong Un has been pushing for educational reforms in recent years. These have included increases in technological and scientific innovation.

One robot that used a female voice could be heard in the TV report saying, "I help teach educational technology that enhances children's intelligence." The 80-centimeter tall machine moved its arms when it spoke.

A second robot with a white round head showed a happy face on its screen. Another wore a blue plastic suit and had white glasses, the KRT video showed.

Park Kum Hee is a professor at a university in Pyongyang. She told KRT that the development of the educational robots faced some difficulties in the beginning. For example, the robots would often shake their heads when asked questions in both Korean and foreign languages.

"Upgrading this robot's intelligence was difficult for me as someone who majored in psychology," Park said.

She added that the advice of Kim Jong Un to use artificial intelligence in educational settings had “always guided me on the right track."

The KRT footage showed young students repeating after a robot in subjects related to English, math and music. Two children shown at the front of the class reacted to the robot. "Hello? Nice to meet you. Nice to meet you, too. What's your name?" the students said.

The students shown were wearing masks. North Korea reopened schools in June of 2020. But a requirement was established for children to wear masks in class and washing stations were set up.

The secretive country has not officially reported a single coronavirus case. But it has ordered several anti-virus measures, including closing borders and limiting travel within the country.

innovation – n. the act or process of introducing new ideas, devices, or methods

enhance – v. to improve something

screen – n. the part of a television or computer that shows images or writing

suit – n. a matching jacket and pants that are worn on the body

on track – phr. making progress and likely to succeed