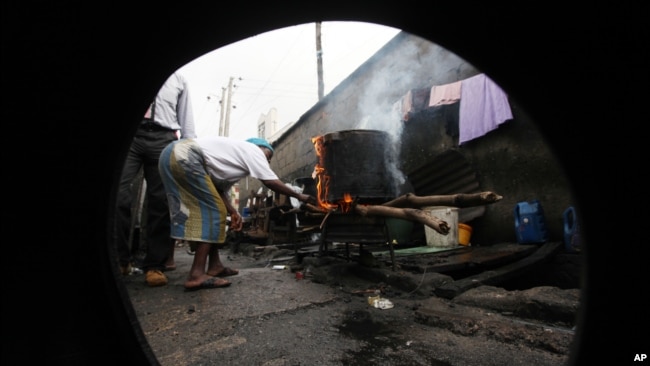 FILE - July 11, 2011 photo, A woman is seen through a broken-down car tire, as she uses firewood to prepare a meal in Lagos, Nigeria.(AP Photo/Sunday Alamba)

Nigerians have been lining up to buy Adunni Abdul's black-eyed peas called moimoi in a market in Lagos for more than 10 years.

Five years ago, she started to cook them in leaves using liquid petroleum gas (LPG). That does not cause a lot of black smoke.

"Gas is costly, that is why I am using firewood," she told Reuters. She explained that LPG had helped her breathe more easily and cooked her food faster.

Burning LPG releases around 50 percent less carbon than charcoal. It also releases 20 percent less carbon gasses than heating oil. Switching to the gas from wood is a central proposal for carbon reduction plans in Africa's most populous nation. Nigeria is home to more than 200 million people.

President Muhammadu Buhari commented on cleaner cooking in his recent speech at the United Nations climate meeting in Glasgow, Scotland. But LPG prices have risen by 60 percent over the past year in Nigeria’s biggest city of Lagos. Inflation there is very high and unemployment is rising.

Many women like 73-year-old Abdul spend hours inside cooking areas or at roadside cooking stands. They believe they have no choice but to burn wood or charcoal although it damages their health and harms forests.

Nigeria's LPG use did not increase in 2020 after nearly 10 years of growth, according to the World LPG Association. In 2018, five percent of Nigerians used LPG for cooking while 73 percent depended on charcoal or biomass like wood. Those are the latest numbers from the United Nations International Energy Agency.

Lagos charcoal seller Jerry Inyang said he now sells as many as 90 packs of charcoal a day. Three times the amount last year. Also, household demand for LPG began falling in 2020, according to the World LPG Association. Information for 2021 is not yet available. The Nigeria LPG Association (NLPGA) said the country is at risk of losing the gains it has made in natural gas use.

Felix Ekundayo is deputy president of the NLPGA. He said a lack of energy supplies has led to an increase in prices for U.S., European and Middle Eastern LPG. He said prices are near a seven-year high and are behind Nigeria's rising prices.

Nigeria is a major oil producer and a member of OPEC, the organization for oil-exporting countries. But it lacks the industrial ability to process the oil. Nigeria burns off large amounts of natural gas every year.

Ekundayo said the falling value of the country’s currency and a recently added 7.5 percent tax on LPG imports has increased prices further. The NLPGA has called on the government to withdraw the tax, which was added to make money for the government.

"The time at which gas is displacing other dirty fuel, that is not the time to have inconsistent policy," Ekundayo said.

Spokesmen for Buhari and the Petroleum Ministry did not comment on the tax.

Abdul is also hoping LPG prices ease. The smoke from the wood fire hurts her chest, and she wants to use gas again. "I want the government to help and reduce this," she said.

charcoal –n. a fuel made from burned wood

subsidy –n. money that is paid usually by a government to keep the price of a product or service low or to help a business or organization to continue

inconsistent –adj. not continuing to happen or develop in the same way