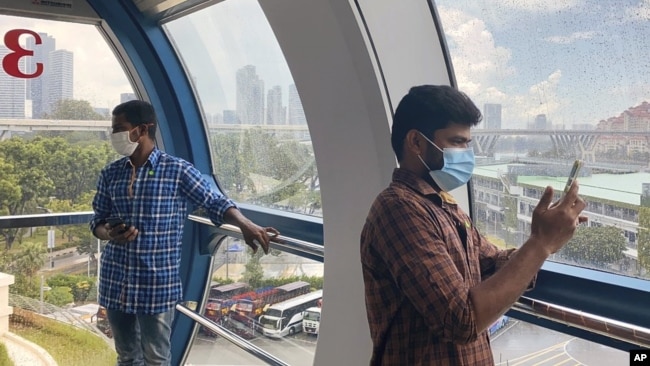 The Ferris wheel in Singapore was getting hit with raindrops.

But the migrant workers riding the Singapore Flyer did not seem to mind. They were trying to see the city skyline from above.

They were just a small number of at least 20,000 workers getting a free ride as a gift from members of the public and businesses.

The program ItsRainingRaincoats began a few years ago to help spread kindness to Singapore’s migrant workers. In January, it began calling for ride tickets to be donated to the workers.

Dipa Swaminathan is the group’s founder. She said a volunteer saw the rides as a meaningful way to use tourism money provided by the government.

Singapore citizens ages 18 and older have received about $74 each in tourism money. They must spend it on attractions, hotels and tours – all businesses that have lost money during the coronavirus pandemic.

Swaminathan’s group worked with the Ferris wheel operator and a booking website to get tickets for the foreign workers. A lot of people see that the workers have given so much to Singapore “and this is their chance to give back,” Swaminathan said.

“There’s a lot of joy in giving. I think that’s what causes the public…to support us” in these kinds of actions, she told The Associated Press.

The group will keep organizing rides as long as tickets come in.

A ticket, which includes entrance to an interactive space, costs about $26. There are currently enough tickets for 20,000 workers.

She said the “contained” nature of the Ferris wheel makes it a good fit.

Volunteers reminded the riders to keep their facial coverings on and keep a one-meter distance during a recent visit.

Ganesan Thivagar recently visited with a few other migrant workers.

They waited while rides were briefly stopped for bad weather. When it was time to go on, the 165-meter-high wheel did not offer such great views.

But that did not affect the 34-year-old. He was paying attention to the areas he could see. And he was struck by how much Singapore had changed since he arrived 14 years ago.

He quickly began taking pictures for his family, who live in India’s Tamil Nadu state.

“I am happy to enjoy the trip and enjoy together with my friends. Thanks to Singapore, (I get to) come here,” Thivagar said.

Workers like Thivagar have had a hard time. Their small living spaces had high coronavirus infection rates early during the pandemic.

Migrant workers have made up most of Singapore’s 60,000 reported cases. Last year, the high infection rates brought sudden attention to their situation – crowded living conditions, low wages and lack of healthcare.

Although the infection situation is under control, these workers have had more restrictions on movement than the general population. The rules are being eased by officials.

Natarajan Pandiarajan, who is 29, said the restrictions were “really difficult.” He was thankful for a break like his recent ride on the Ferris wheel. “Inside many feelings I also have. But this time now, coming on, happiness,” he said.