Will US Consider Boycott of Beijing Olympics?

Will US Consider Boycott of Beijing Olympics? 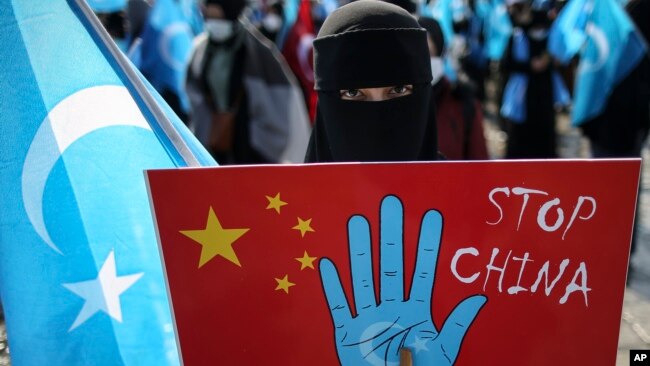 A protester from the Uyghur community living in Turkey holds up an anti-China placard during a protest against the visit of China's Foreign Minister Wang Yi to Turkey, in Istanbul, Thursday, March 25, 2021. (AP Photo/Emrah Gurel)

The U.S. State Department says it is talking with allies about China’s human rights record and how to deal with the 2022 Winter Olympics in Beijing.

State Department spokesperson Ned Price told reporters Tuesday the U.S. would discuss with allies whether to jointly boycott the games. But a state department official later told The Associated Press that the possibility of a boycott had not yet been discussed.

Human rights groups are protesting China holding the games, which are set to open on February 4, 2022. They accuse China of carrying out human rights abuses against Uyghur Muslims, as well as people in Tibet and Hong Kong.

Activists have sought support for their cause from national Olympic committees, athletes and companies supporting the games. The International Olympic Committee (IOC) has rejected calls to move the Olympics out of China.

Here is a look at some of the main issues surrounding a possible boycott:

Position of IOC and China

President Thomas Bach has said the IOC must remain “neutral” and out of politics, although the organization holds observer status at the United Nations. Bach told a news conference last month: “We are not a super-world government where the IOC could solve or even address issues” that the U.N. and other international organizations have not been able to solve.

China’s government warned Washington on Wednesday not to boycott, warning of a “robust” Chinese reaction if it did.

“The politicization of sports will damage the spirit of the Olympic Charter and the interests of athletes from all countries,” Foreign Ministry spokesperson Zhao Lijian said. He added that international and U.S. Olympic officials “will not accept” a boycott.

Activists have met with IOC

Activists met late last year with the IOC and requested that the 2022 Olympics be moved. They also asked to see documents the IOC says it has in which China gave “assurances” about human rights conditions. Activists say the IOC has not produced the documents.

The meeting was headed by IOC member Juan Antonio Samaranch Jr., who oversees preparations for Beijing.

Gloria Montgomery is an activist with the International Tibet Network. She said recently she felt like the IOC agreed to the meeting “so that they could say they were having a meeting with us, rather than because they actually wanted to listen and act on anything that we had to say.”

Activists have considered a diplomatic boycott, but have not ruled out the kind led by the U.S. in the 1980 Moscow Olympics. During those games, 65 countries -- including China -- stayed away, while 80 attended.

Zumretay Arkin is a spokeswoman for the World Uyghur Congress. She told The Associated Press she thinks a diplomatic boycott would be welcomed by her communities. “We have been looking towards accountability, and that is definitely part of that path toward accountability,” she said.

What would a boycott do?

IOC President Bach, who won a gold medal in fencing in the 1976 Games, was kept home from Moscow in 1980 as a member of the West German team. He opposes a boycott, which he says would hurt the athletes, as well as the IOC's finances and image.

The IOC earns 91 percent of its money from selling broadcast rights and sponsorships and has seen its income weakened by the postponed Tokyo Olympics.

Some activists say they see a boycott as one of the few forms of leverage they have. “Before we called for a boycott, we hoped that the IOC could strip China of (holding) the Olympics, but they didn’t want to do that,” said Teng Biao. He is an exiled Chinese human-rights lawyer and activist. “I think the Olympics is a thing the Beijing government cares very much about. We should not give up that chance.”

athlete – n. a person who is trained in or is good at sports, games, or exercises that require physical skill and strength

address – v. to speak to someone of give a speech to an audience

accountability – n. the fact or condition of being accountable; responsibility

sponsor – n. a person or organization that gives money to support an activity, event, etc.

leverage – n. the power to influence people in order to get what you want

strip – v. to remove or take away