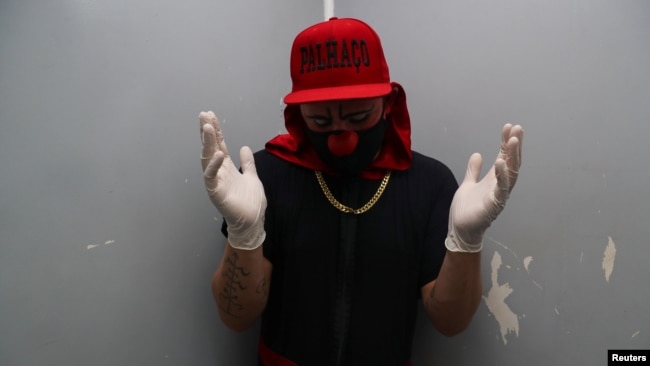 Flavio Falcone, a psychiatrist, wears gloves and a protective face mask in the elevator of the building where he lives as he makes his way to perform as a clown in an area known as "cracolandia," or crackland in Sao Paolo, Brazil. REUTERS/Amanda Perobelli

Doctor Flavio Falcone could not get homeless drug addicts to talk to him on the streets while wearing his white medical coat.

But with face paint and a big, red ball for a nose, the mental health doctor has become a hero in “cracolandia,” or crackland: a poor area of Sao Paulo, Brazil, that is home to many homeless people and drug abusers.

Falcone’s patients know him as The Clown, not the doctor.

He treats a growing number of Brazilians living on the street because of COVID-19. The pandemic has badly hurt Brazil’s economy and the government continues to reduce its assistance programs for the poor.

Falcone as clown wears gold jewelry, black and red clothes and a baseball cap, a kind of hat.

Falcone is not alone in his street work. Actor Andrea Macera joins him in the outreach effort. She also wears clown clothing. The two use humor and music to help put people at ease. It is a first step in providing mental health and drug abuse treatment to the people of Cracolandia.

“What makes you laugh is the clown that trips, not the clown who walks straight,” Falcone said. “The people who are on the street are really the failures of capitalist society.”

During Falcone’s “radio” time, people gather in a circle to watch and sing along.

Falcone’s work has made him famous in the neighborhood. Falcone and Macera found housing for about 20 newly homeless people and gave out 200 tents provided by a Brazilian non-governmental organization.

Jailson Antonio de Oliveira says that the clown is his main support. Falcone’s aid group pays for the 51-year-old’s shelter.

“Today I have a better life because of Flavio Falcone, the clown,” said Oliveira. “He’s my right arm, he helps with everything he can.”

Government support is extremely limited in places like crackland.

One month after the coronavirus arrived in Brazil, in April 2020, the government closed down a neighborhood homeless shelter. So now, the closest shelter is three kilometers away.

The Brazilian homeless population increased after government aid went away at the end of 2020. Payments are finally starting up again this month at lower rates.

For many, that money is too late. Millions of people have fallen into poverty since the start of 2021.

When the money ran out, Jonatha de David Sousa Reis and Bruna Kelly Simoes lost their home. This year, the couple moved into a tent they set up between two trees in cracolandia.

“As long as there are no jobs, the emergency payment should have been maintained as it was,” Reis said. “It’s been difficult, very difficult.”

The two are on the street just as COVID-19 is at it its worst point in Brazil. The country recorded 4,000 daily deaths for the first time last week. Brazil is second to only the United States in deaths and cases.

Reis said he hoped to get his job back at the shipping company when the health crisis eases. But scientists only expect the virus to get worse over the next few months.

failure- n. - a lack of success in some effort

capitalism-n. a way of organizing an economy so that the things that are used to make and transport products (such as land, oil, factories, ships, etc.) are owned by individual people and companies rather than by the government

society-n. people in general thought of as living together in organized communities with shared laws, traditions, and values

maintain v.- to cause (something) to exist or continue without changing

英語の小窓−使役
Doctor Flavio Falcone could not get homeless drug addicts to talk to him on the streets while wearing his white medical coat.
get, have, make, let 使役の表現
get A to do      Aに〜させる（直接的なイメージ）
I get her to go the the place.
have A do     Aに〜してもらう
I have her to make a copy.
make A do    Aに〜させる（強制的）
He make me cleam the room.
let A do       Aが〜したいという状態にしておく（許可）
I let him go.
即座に口から出るまでレッソン！！
« コロナで苦境に追いやられる人々とは裏腹… 2022 北京オリンピックを考える！ »
Profile