China Asks Citizens to Store Necessities ahead of Cold Weather

China Asks Citizens to Store Necessities ahead of Cold Weather 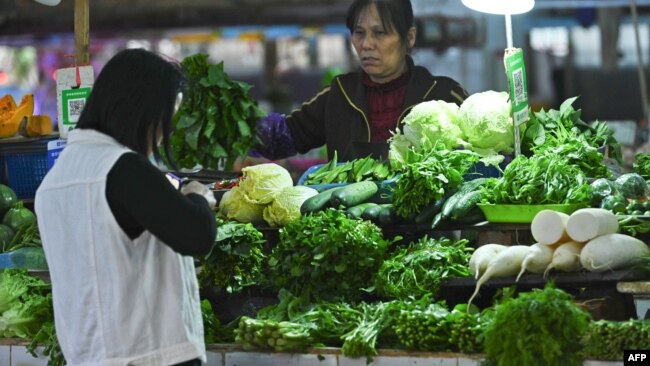 This photo taken on November 1, 2021 shows a resident buying vegetables at a market in Nanning, in China's southern Guangxi region. (Photo by AFP)

China’s commerce ministry has told families to keep a store of daily necessities in case of emergencies. COVID-19 outbreaks and unusually heavy rains caused an increase in vegetable prices, which has raised concerns about supply shortages.

Some Chinese citizens placed comments on social media that expressed fears of food shortages. Earlier this week, state media tried to ease those fears and further explain the ministry's statement.

The Economic Daily newspaper told people not to have "too much of an overactive imagination." The newspaper added that the purpose of the order was to make sure citizens were not surprised if there was a lockdown in their area.

The People's Daily said the ministry makes such statements every year. The ministry made a similar announcement earlier this year because of natural disasters, the increase in vegetable prices and recent COVID-19 cases.

The ministry's statement this week urged local officials to do a good job in ensuring food supplies and fixed prices. The statement also urged officials to give early warnings of any supply problems.

But this year, those efforts have become more urgent after extreme weather in early October destroyed crops in Shandong, the country's biggest vegetable growing area. Outbreaks of COVID-19 cases stretching from the northwest to the northeast of the country also threaten food supplies.

Last week, prices of cucumbers, spinach and broccoli had more than doubled from early October.

Prices have eased in recent days. But economists expect a major increase in consumer price inflation for October compared to last year.

The pandemic has caused an increased concern about food security. The government has written a food security law and is planning new efforts to stop food waste.

The commerce ministry said local officials should buy vegetables that can be stored for long periods of time and strengthen emergency food distribution systems. Information about prices and supply and demand of goods should be released in a timely manner to ease people's expectations, it added.

State television reported recently that China also plans to release vegetable reserves "at an appropriate time" to deal with rising prices. It is not clear which vegetables China holds in reserves and how big those reserves are.

The report added that the state planning body has called for the timely replanting of vegetables and urged local governments to support fast-growing produce.

flashlight – n. a small electric light that can be carried in your hand and that runs on batteries​

commerce - n. activities that relate to the buying and selling of goods and services

consumer – n. a person who buys goods and services​

reserves – n. a supply of something that is stored so that it can be used at a later time​

the state of the economy/business/condition：景気