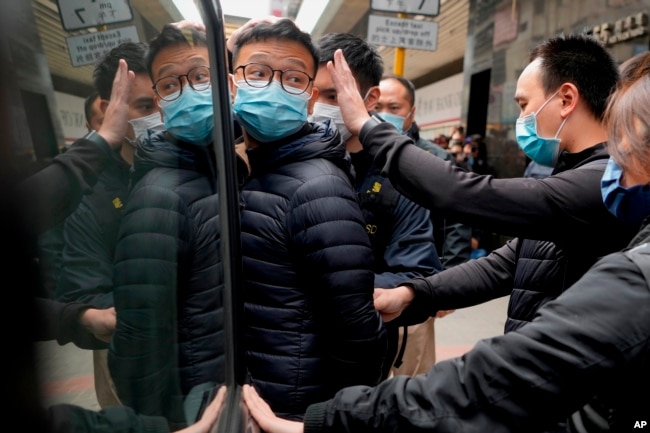 Editor of Stand News Patrick Lam, center, is escorted by police officers into a van after they searched evidence at his office in Hong Kong, Dec. 29, 2021. (AP)香港のオフィスで証拠品を捜索した後、警察官に付き添われてバンに乗り込むスタンドニュースのパトリック・ラム編集長（中央）（2021年12月29日撮影）。(AP通信)

In Hong Kong, law enforcement officials forced the closure of media company Stand News on Wednesday and arrested six current or former workers in a raid.

Reports say the employees were charged with suspected “seditious publication.” Stand News was set up in 2014 as a non-profit media company. It was the best known publication supporting democracy in Hong Kong after the closure of Apple Daily in June. Police also seized the money and property of the business.

In addition to arresting six current or former employees of Stand News, police also arrested activist and popular singer Denise Ho. She was a former board member of the media company who was also charged with involvement in publishing a seditious publication.

The latest raid adds to concerns about press freedom in the former British colony that was returned to Chinese rule in 1997.

2021: a difficult year for media in Hong Kong

The year 2021 brought major changes for media in Hong Kong.

The changes came largely from a national security law for the territory that was passed in Beijing.

Hong Kong was once a model for press freedom. Protests were covered freely by local and international reporters. But those same protests led to mainland China’s new national security law, which bans what it calls secession and collusion with foreign forces.

Journalists’ associations, including the Foreign Correspondents’ Club (FCC) in Hong Kong, are concerned about the law’s effects. The FCC’s yearly opinion study of members found that 84 percent believe conditions have changed for the worse since the law came into effect.

'We can never get back'

Ronson Chan is chair of the Hong Kong Journalists Association and an editor at news website Stand News. Reports say he was not arrested Wednesday.

“We never can get back. Hong Kong has changed,” Chan said. “Freedom of press has many red lines.”

Keeping a free press in Hong Kong was the best way to differentiate between the city and China, Chan said. He added that it is “important for the Hong Kong people to still have a good media.”

Hong Kong Chief Executive Carrie Lam has repeatedly said that press freedom is guaranteed under Hong Kong’s Basic Law. The Basic Law was put in place before Britain turned Hong Kong over to mainland China in 1997. Lam has denied that the arrests and the closure of Apple Daily were an attack on the media. She said journalists have a responsibility to not break the new law.

Jimmy Lai, the founder of Apple Daily, feared his company could not survive. In June 2021, Apple Daily shut down.

Several executives were charged under the security law and the company’s finances were frozen. The company was then unable to pay its workers or for goods and services.

Lai has spent over a year in prison. He was convicted of taking part in protests against some government measures. He is also awaiting trial on another charge.

Under the newly appointed director, Patrick Li, the broadcaster ended some shows, removed part of the station’s online archive, and gave Lam a regular show to discuss China’s electoral reforms for the city.

The changes in Hong Kong reflect a wider crackdown by China on the press, says a December report by media rights group Reporters Without Borders (RSF).

China has 127 journalists in detention, the most in the world.

RSF also identified 10 main issues in media suppression. They include censorship and propaganda pressure, and increased difficulty for foreign press in securing visas.

“I think whatever the reason, kicking out an Economist correspondent means they would expel anyone from any organization,” an international journalist based in Hong Kong told VOA. The reporter asked not to be named.

Eric Wishart is a veteran journalist and part of the press freedom committee at the Foreign Correspondents Club. He told VOA earlier this year that journalists are not sure about what will get them in trouble with officials.

“We talk about the ‘red lines’ in Hong Kong…” Wishart said. “It is a changing landscape, and that is a big, big challenge for everybody.”

seditious –adj. the crime of saying, writing or doing something that incites people to disobey their government

secession –n. the act of separating from a nation or state and becoming independent

collusion –n. secret cooperation for an illegal or dishonest purpose

journalist –n. the activity or job of collecting, writing, and editing news stories for newspapers, magazines, television, or radio

red line –n. a point beyond which safety is no longer guaranteed

editorial –adj. related to the job of editing: the job of preparing written material for publication

archive –n. a place where written materials, or other media are stored so they can be used in the future

landscape –n. what exists in a particular area of activity

challenge –n. an issue or problem that is difficult to deal with or solve