Everything You Need to Know About NIL

set (one) up for life

To provide enough money to sustain one for rest of one's life. The phrase is typically understood to mean that one will no longer have to earn an income.  ーIdiom ーIdioms by The Fee Dictionary 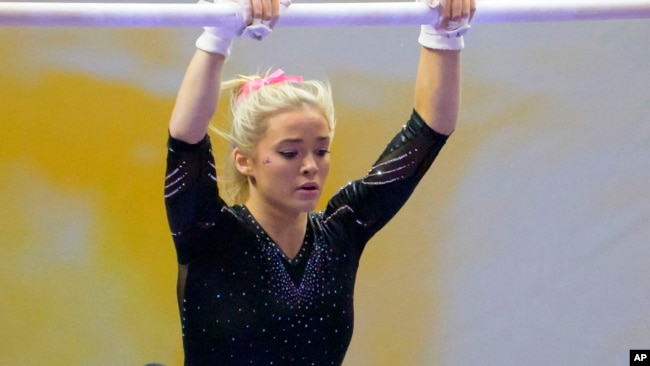 FILE - Livvy Dunne, seen here on Feb. 5, 2022, is a gymnast at LSU. She has millions of social media followers and is making money through name, image, likeness, or NIL deals. (APPhoto/Matthew Hinton, File)

It is an opportunity for young athletes to get attention and become famous.

The tournament games are known as “March Madness.”

In the 1970s and 1980s, basketball players like Magic Johnson and Michael Jordan first became famous in March.

However, they were not permitted to make money from their fame until becoming professionals and joining the National Basketball Association. After they became professionals, they could get paid by their teams and do advertisements for companies like Nike.

Now however, thanks to a decision by the U.S. Supreme Court last June, American college athletes are now permitted to make money from their fame.

The athletes can make money by permitting businesses to use their name, image and likeness to sell a product. The agreements are called “NIL” deals.

As a result, some university athletes are becoming wealthy at age 20.

Others may not become wealthy, but they want money “to fall back on.” That means they will have some saved money even if they do not have a long sports career. That is the viewpoint of Deja Kelly, a basketball player at the University of North Carolina – Chapel Hill.

The NIL deals are important for female athletes who will not have as many opportunities to make money as male athletes after college.

“We can’t play forever. The ball stops bouncing at some point,” Kelly said.

How they make money

Many of the deals require the students to place messages on social media apps such as Instagram and TikTok to reach fans. In others, the students’ faces appear in advertisements for businesses in return for money. Some businesses give students money so they can make clothing items with their names or faces.

“It’ll set me up for life,” Kelly said, meaning she hopes to not have financial worries in the future.

Most of the time it is easier for male athletes to make money with NIL deals, because their sports are seen by more people. However, some female athletes are doing well because they are very attractive.

Livvy Dunne is one of them. She is a 19-year-old gymnast at Louisiana State University. She has about 6 million followers combined on Instagram and TikTok. In a written response to questions sent by The Associated Press, Dunne said she has about 10 NIL deals.

Masai Russell is a track and field athlete for the University of Kentucky. She has about 20 NIL deals with companies that include media company Hulu and Walgreens, a store that has about 9,000 locations around the U.S. She gets paid to make advertisements on Instagram that show items like clothing and vitamins.

Russell said she earns more than $100,000 per year from her NIL deals, but she is trying to be careful with the money.

“I’m trying to play it out very smart…so that I’m pretty well-off in my later years.”

Gloria Nevarez is the top athletics official for a group of colleges in the western U.S. She said she hopes the young women succeed for more reasons than just “attractiveness.”

Not easy money for all

While some are doing well, not all college athletes are making lots of money.

One of them is Bailey Moody. She is a wheelchair basketball player at the University of Alabama and a member of the U.S.A. Paralympic team. She said making money from NIL deals is a lot of work. She congratulates those who do on their success.

Blake Lawrence works for a company called Opendorse, which helps college athletes find NIL deals. He said most are not making that much money: a good deal might bring in about $250 per month.

There is one group of college athletes, however, who are not permitted to make money from NIL deals: international students who come to college in the U.S. on F-1 student visas.

Leigh Cole is an immigration lawyer in Vermont. She said breaking that rule would have serious “consequences."

Peter Schoenthal’s company Athliance helps college athletes understand NIL rules. He said the system is confusing, and it is safer for international students to avoid it in order to prevent a violation.

The future of NIL deals is not yet decided. Many states now have laws that permit students to make money while playing college sports. But there may still be a discussion in the U.S. Congress about a national law related to the issue.

tournament –n. a sports competition or a series of contests that continues for weeks or several days leading to one winner

athlete –n. a person who is trained or good in sports

likeness – n. a picture of a person

bounce –v. to cause a ball to hit against a surface and quickly move in the other direction

attractive – adj. having a pleasing appearance

gymnast – n. a person who performs various physical exercises on a mat or special equipment as part of an athletics competition

vitamin –n. a substance found in foods or pills that can be taken to help your body be healthy

consequence –n. something that happens as a result of another action

confusing –adj. something that is hard to understand


What does NIL mean and Where did it come from?

Everything You Need to Know About NIL

College sports are currently undergoing what may prove to be the single most significant change they will ever experience, all from one simple question: should college athletes be paid? The answer comes down to three letters: NIL.

In the simplest of terms, Name, Image and Likeness (NIL) is a term that describes the means through which college athletes are allowed to receive financial compensation. NIL refers to the use of an athlete’s name, image, and likeness through marketing and promotional endeavors. This can include autograph signings, product endorsements, social media posts, and more.

At the same time, it’s important to understand what NIL does not mean. NCAA rules still prevent schools from paying players directly. This means that college coaches cannot offer money as an incentive for high school athletes to come play at their school, nor can athletes receive compensation directly from their university based upon their athletic achievements. Because the NCAA still intends to maintain its amateur sports status, paying athletes for their play on the field isn’t possible. However, NIL is the workaround for athletes to get paid without technically being considered professional athletes who make a living playing their sport.

NIL can trace its origins to a class-action lawsuit filed in the late 2000s that marks the beginning of the “should college athletes be paid” debate. Former UCLA basketball player Ed O’Bannon argued that college athletes should be compensated for the use of their name and image in video games. Eventually, A judge ordered the NCAA to pay $44.4 million in attorneys’ fees and another $1.5 million in costs to lawyers for the plaintiffs in the Ed O’Bannon class-action antitrust lawsuit. This case opened up the doors for more questions and lawsuits around athletes’ name, image, and likeness.

The largest of these advancements came in 2019 when California enacted the Fair Pay to Play Act, which allowed athletes to be compensated for promotional opportunities. Other states quickly followed and similar legislation in different regions forced the NCAA to take a look at their stance on NIL.