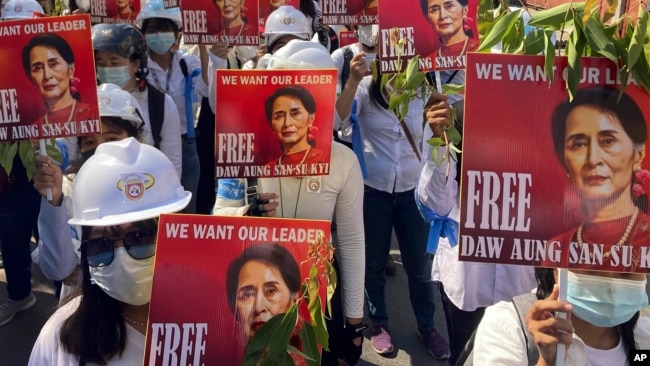 A court in military-ruled Myanmar found ousted leader Aung San Suu Kyi guilty Monday on two charges. One charge was for incitement and the other for violating coronavirus restrictions.

Suu Kyi is set to serve two years in detention.

The incitement charge centered on statements published on the Facebook page for Suu Kyi’s National League for Democracy party. She and others were accused of spreading false information and information that could harm public order.

At first, the court announced a sentence of four years. But that was later reduced to two years in a decision issued by the country’s military chief, state television reported.

The 76-year-old Suu Kyi has been held in detention at an unknown place since her arrest on February 1. The military seized power on that day, just as newly elected lawmakers were to take their seats in parliament. State television reported that Suu Kyi would stay where she is currently being held to serve her full sentence.

The military has said it seized power because of wrongdoing during elections held in November. The country’s electoral commission has rejected those claims. Suu Kyi’s National League for Democracy won a majority of seats during the elections.

Monday’s court decision was the first in a series of cases brought against Suu Kyi. If she is found guilty of all charges she faces, she could be sentenced to more than 100 years in prison.

Human rights groups have widely condemned the trial. They say the legal process against Suu Kyi and other officials is an attempt by the country’s military to remove Suu Kyi as a political force and strengthen its power.

Defense lawyers are expected to file appeals in the coming days for Suu Kyi and other officials also convicted on Monday, the Associated Press reported. The lawyers have argued that Suu Kyi and her co-defendant, Win Myint, could not be held responsible for statements on which the incitement charge was based. They say this is because the two were already in detention when the statements were published online.

The army’s seizure of power led to large nonviolent protests across the country. The military has made numerous arrests and used deadly force against the protesters. Activist groups say about 1,300 people have been killed by security forces.

Opponents of the military government held protest marches Sunday to call for the release of Suu Kyi and others.

Decisions in other cases against Suu Kyi are expected next week. Other charges include one linked to the unregistered import of radio communication equipment thar her security guards used. Suu Kyi is also accused of violating the Official Secrets Act, which carries a prison term of up to 14 years. Another charge is for bribery, which carries a term of up to 15 years.

U.S. Secretary of State Antony Blinken called the court’s decision "unjust" and called for the release of Suu Kyi and other detained elected officials.

The European Union's top diplomat condemned the action as "politically motivated" and called for the immediate release of all political prisoners in Myanmar.

China has long kept good relations with Myanmar’s military as well as Suu Kyi's government. It urged all parties to "bridge their differences." Japan, a major investor in Myanmar, called the court’s decision an "unfavorable development."

convict – v. to decide officially in a court of law that someone is guilty of a particular crime​

bribery – n. attempts to make someone do something, usually something dishonest, by offering them money or gifts

motivate – v. to make someone eager to do something