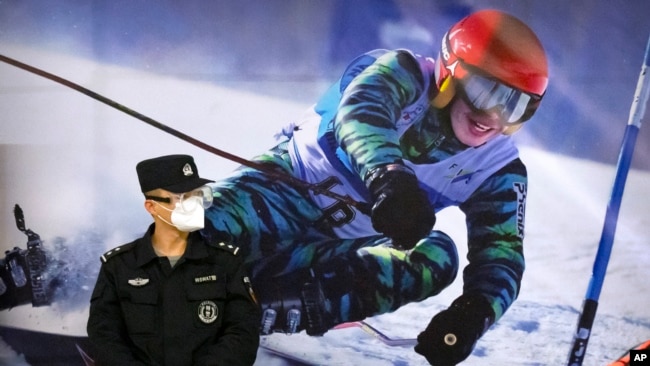 FILE - A police officer wearing a face mask and goggles to protect against COVID-19, stands near a poster of a skier on the wall at a train station in Zhangjiakou in northern China's Hebei Province, Friday, Nov. 26, 2021. (AP Photo/Mark Schiefelbein, File

China on Monday threatened to take “firm countermeasures” if the United States continues with a diplomatic boycott of February’s Beijing Winter Olympic Games.

Foreign Ministry spokesperson Zhao Lijian accused U.S. politicians of trying to get attention with the boycott. Speaking to reporters Monday, Zhao said such a move would be a “political provocation.” He gave no details on how China would react.

A diplomatic boycott means the U.S. would not send any government officials to the Olympics, but American athletes would still compete.

President Joe Biden’s administration announced the boycott later on Monday. Supporters of the move note China’s poor record on human rights. They say China is using the Olympics to draw attention away from its poor treatment of civil rights activists, political dissidents and ethnic minorities. China hopes the Olympics will show to the world its economic development and technological progress.

“If the U.S. side is bent on going its own way, China will take firm countermeasures,” Zhao said.

Sending high-level officials to each Olympics has long been a tradition for the United States and other powerful nations. Former president George W. Bush attended the opening of the 2008 Beijing Olympic Summer Games. First lady Jill Biden attended the Summer Olympics in Tokyo this summer.

The diplomatic boycott comes as the U.S. attempts to improve relations with China. The two nations have been in conflict over trade, as well as China’s actions related to Taiwan, Hong Kong, human rights, and the South China Sea.

China has sharply answered all U.S. criticisms, denouncing them as interference in its own affairs. China has placed visa bans on American politicians considered to be “anti-China.”

It was not clear who the U.S. might have sent to Beijing for the Olympics. Zhao’s comments suggest that China had not sent any invitations.

Australia has also raised the possibility of a diplomatic boycott of the Winter Olympics. Its relations with China have greatly worsened.

provoke — v. to cause to become angry, violent, etc.

hype — v. to talk or write about in a way that is intended to make people excited or interested

bent — n. an attraction to or an interest in a particular thing or activity